The Town were admitted to the Combination on 4 January 1906 after Middlewich folded and were placed in an unenviable position at the foot of the table with 4 points after 16 games. Former Bury and Preston North End trainer, Fred Fairhurst was appointed around this time with the first League game approaching. It took until the third match, against Birkenhead, to improve on the unimpressive record set by Middlewich, only to have the points removed a week later for fielding an ineligible player.  The Wigan Examiner of 7 February 1906 reports that Sir Francis Sharp Powell had become the club President, this was probably influenced by director, James O’Donohue.
Despite bringing several new players into the team, results continued in a bad vein and when Roger Charnley was appointed manager on 10 March 1906, the points total remained the same. The situation would not change until the final two games of the season when a win and a draw were recorded to give a grand total of 7 points for the season, 14 behind the next club.  This dismal run of results would no doubt have some bearing at the election meeting to determine the new clubs to play in the Second Division for the next season: Wigan Town received just 5 votes.……..
Wigan Town 5-v-7 Hull City
Friendly : December 30 1905 : Springfield Park (ht 2-4)
Teams:
Wigan Town: Hodgkiss, Britnall, Smith, Gledhill, Jones, A. N. Other, Wilson, Taylor, L. Smith, Forbes, Currey. (Res: Nutter, Greenay, Burns and Pilling)
Hull City: Spendiff, Romig, Jones, Browell, Frost, Raisbeck, Martin, Manning, Spence, “Denaby” Smith, Stanley Smith.

George Robey’s visit to Wigan for charitable causes.
Match played on January 17, 1906:
On Wednesday Mr. Geo. Robey’s team visited the town.  A good team was brought down amongst the players being McBride, Bond and Lyons of Preston, Bannister, Gregory and Buchan of Manchester City and three players of note. The game was very interesting and a clever exhibition was given by the visitors.  Robey was of course the attraction of all eyes, but he is hardly a player in any sense.  However the crowd was amused and were never tired of calling out “Give it George”.  George failed to score, and the majority were disappointed of that. The proceeds are to be donated to local charities and the best thanks of all are due to Mr. Robey and the Wigan committee.

There appears to be a feeling in the town and district that the Wigan Town as at present constituted is the side which will represent them next season, when they hope to be members of the Second division of the Football League.  We are asked to deny this, and to state that there is now a very great probability that a position will be given them next season in the Second Division.  Already a number of first-class players have been signed on, and it is expected that they will have a team that will be able to hold its own with any team in the Second division.  This season an attempt is being made to try a number of local players in order to obtain a good reserve team.  Of course, it must be well known that the players who have signed on for next season cannot leave now, as they are playing for other clubs. This week end Wigan Town will entertain Crewe Alexandra in the Combination League.  It is expected that the prospectus of the club will be issued this week.

We are informed that the Wigan Town Club has secured the services of a very capable left full back from the 4th Lancashire Fusiliers, the Irish Cup winners. The player in question is J. Clinch, who is 22 years of age, stands 5 foot 11 inches in height, and weighs 12 stone 6lbs.  Clinch is to turn out for the Town in the Combination match with Crewe Alexandra, at Springfield Park this Saturday.

The Wigan Town Club was without a Combination fixture on Saturday, and it was decided to play a trial game between teams representing Old Wigan Town and New Wigan Town, the latter contingent being principally composed of players who have not previously been identified with the club.  The contest took place on the Poolstock ground, and probably inclement weather had much to do with the attendance, there being only a moderate number of spectators.  Improved form was displayed by the Old Wigan Town team, Lance Smith appearing to better advantage than has been the case since he became associated with the contingent, whilst Alec Davidson was also in particularly fine form.  A new player in Dobson of Preston, who figured at left full back gave a very satisfactory exhibition, his kicking being clean, whilst he showed rare judgement, and he is one of three new exponents who have been selected to assist the team this Saturday in the Combination engagement with Port Sunlight at Springfield Park, the other two men being Jarvis and Duncan Douglas of Manchester.

WIGAN TOWN AND THE SECOND DIVISION

“The people who are associated with the Wigan Town Club are very confident,” says the “Athletic News,” “of their prospects of securing admission to the Second Division of the League, and are certainly working with praiseworthy efforts towards that end.  They are inclined to the belief that one club will not be re-elected, and they are after that possible vacancy with a keenness which deserves success.  The other week Mr. Roger Charnley, a son of the League secretary, entered on his duties as manager.  Mr. Charnley is conversant with the working of a League club, having assisted his father during the time the latter was secretary of Preston North End, and possesses all the enthusiasm of a young man.  The League clubs are admittedly rather conservative, and do not like to throw out old clubs for new ones, but Wigan can well support a Second Division club.  At any rate the officials are prepared to try. Meanwhile, it would be to the advantage of the club’s prospects were the team to accomplish something smart in their present company. The results are certainly not very encouraging.”  Accompanying the above comments appears a portrait of Wigan Town’s new secretary. 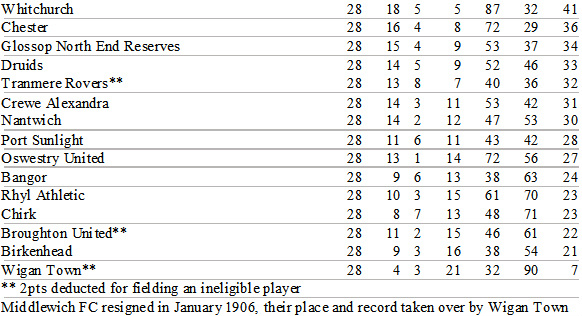 A meeting of the Lancashire Football Combination was held on Thursday evening. The election of the clubs to be retained in the League took place, Padiham having resigned, this created one vacancy, and amongst the applicants were Wigan Town, Ince Athletic, and Glossop Reserves.  Hyde and Haslingden were re-elected, whilst Wigan Town and Glossop Reserves were chosen to displace Newton-le-Willows and Haslingden.  Wigan Town have thus secured a position in Division “B” of the Lancashire Combination, and if they are successful in securing a position in the Second Division of the English League, the reserve team will play the Combination matches.  If the application for the 2nd Division is unsuccessful, the Town will continue members of the English Combination, and play their reserve team in the Lancashire Combination.

"Harricus,” in this week’s “Athletic News,” states :- As there appears to be an impression that Wigan Town had not made application for membership to the Football League, Mr. Roger Charnley, the secretary, informs me this was done some time ago, and encloses circular in which the support of the League clubs is asked. From it I gather that the company has been floated with a capital of £2,500 that the ground at Springfield Park will accommodate 50,000 spectators, including 7,000 under cover, that Wigan is the centre of a population of 250,000, and that it is very accessible, being on the London and North Western main line from London.  The circular further states that Wigan people are anxious for a first-class Association team, and that almost all the junior and school teams favour the dribbling game.

Wigan Town and the League
THE APPLICATION FAILS

The Management Committee meeting of the Football League was held in London on Thursday, when the election of three clubs to fill the vacancies in the Second division was proceeded with.  Mr. Charnley, junr. (son of the secretary of the League), spoke of the claims of Wigan. They had a good ground and were prepared to spend £2,000 on a team.  The vote was then taken with the result that the following were elected :- Chesterfield Town, 36 votes ; Burton United, 32 ; Clapton Orient, 21.  Oldham Athletic (20) and Wigan Town (5) were not elected.  It will be seen that Oldham failed to secure election by one vote.